Posted on March 3, 2016 by Antonio Tanner in Sports

We have a big day ahead of us, boys and girls. Unfortunately for the football team, they have to compete both against the basketball team in viewership and the Georgia Bulldogs in football. I know many of you don’t have ESPN3, but doesn’t the KSR live blog of the basketball game still sound more appealing than actually watching the football team? We’ll have dual live blogs tomorrow with Matt handling basketball from Connecticut and Drew handling football from what I can only imagine as a bedazzled blogging couch.

– Aaron went into detail earlier, but UK plays tomorrow in Athens against a Georgia team that needs this win to clinch the SEC East crown and earn the right to serve as LSU’s last opponent before the national championship game. Now I don’t believe in moral victories, so the trip back to Lexington should be especially depressing. 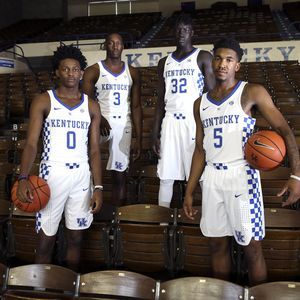 – Good thing for us, God blessed the University of Kentucky with the best basketball program of all-time to alleviate the sadness left by the football program. Believe it or not, Penn State made the NCAA tournament last season. That success was mostly due to four senior starters who played their final game against Temple in the first round. Now the only remaining starter from that team, Tim Frazier, carries the team. Frazier has put up sensational numbers through three games for the Nittany Lions. He averages 21 points, five rebounds, nine assists and three steals per game while shooting over 50 percent front he field, 83 percent from the line and 60 percent from behind the arc. Unfortunately for head coach, Patrick Chambers, Frazier is complemented by a bunch of guys who most likely served as role players even in high school.

– The big news of the day was the basketball team’s trip to the ESPN campus in Bristol. Cal gave his usual answers to John Buccigross on ESPN and to Scott Van Pelt on his radio show, but the players had a lot of fun and it seemed to be a trip worth while. Scroll down to check out more.

– The second big news of the day was that picture that Drew posted. Again, scroll down to check out more.

– In SEC basketball news, Mississippi State redeemed itself after an embarrassing loss to Akron by beating Texas A&M and Arizona, ranked 18 and 16 respectively, on its way to the 2K Sports Classic benefiting Coaches vs. in Madison Square Garden. The team’s next battle will be Renardo Sidney vs. Diabetic Complications Related to Obesity. Good luck, Coach Stansbury!

– Last but not least, for those of you who took offense to Boogie and Jorts speaking on behalf of Mitt Romney, John Wall and Brandon Knight are scheduled to play in the first ever Obama Classic Basketball Game.